Chinese general contractor Sinoma International Engineering and its affiliated CBMI Construction are building a new cement plant for Les Ciments du Sahel in Senegal, which will be almost completely equipped with conveying solutions from the AUMUND Group. The order was the result of successful teamwork between AUMUND France and AUMUND China, and comprises more than 60 machines. 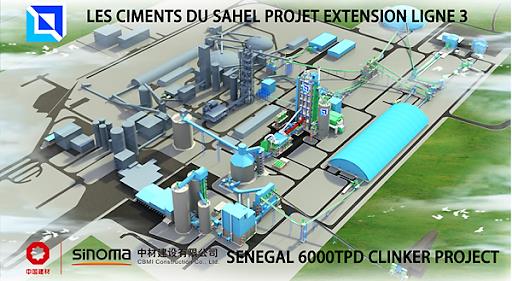 The machines will operate in all stages of the production process, from raw materials discharge to conveying between the clinker silo and the cement mill, and in the packing plant. Supply will be in several tranches between March and June 2021. Commissioning by Sinoma CBMI and Les Ciments du Sahel is planned for the first quarter of 2022.

When the new line starts production in Kirène, which is approximately 50 km east of the Senegalese capital Dakar, Les Ciments du Sahel will be producing an additional 6,000 tpd of cement.

AUMUND France is responsible for looking after customers in the West African Region, and AUMUND China has been working closely with the Sinoma Group for many years. The teams from AUMUND France and AUMUND China were also supported by AUMUND Foerdertechnik, and together they managed to fulfil all technical requirements to the utmost satisfaction of the customer, despite the difficult conditions imposed by the coronavirus pandemic.

If we can help you with any further information, please use the contact form to get in touch.

You will receive an immediate automated acknowledgement, and we will respond to your enquiry as soon as possible.